A downloadable game for Windows

Lost in the Bathrooms Demo

You find yourself inexplicably in endless bathrooms. All you have is a lighter that you light your way. Walking through the corridors you see old and rusty toilet cubicles, rusty showers, old sinks, vile insects run across the floor. You clearly do not want to stay here for a long time, so you are looking for a way out of this nasty place. Along the way, you will meet both characters who will help you, and those who will simply kill you.

This is a demo and not the final product, a lot can change on the release. The demo was created to understand how to make the game better, so feel free to leave your feedback here.

Changelog for those who played the first version of this game - Toiletrooms.

- By popular demand, the game has been renamed

- The man by the fire will not give you the key just like that, you must complete his task

- The toilethead is no longer just stupidly running after us. Now we need to play stealthy

- The game map has been changed, it has become more confusing

- Many other small details (for example, a shower is added, you can interact with the sink, cockroaches crawl on the floor and other)

The list of changes may seem small to you, but I advise you to familiarize yourself with the game if you played toiletrooms.

Tried out your game for one of my obscure videos.  I had a lot of fun with it lmao!  Thanks for making it!

Reply
AmiriTV138 days ago
Love these type of games. It was so good i didnt even know it was a demo. Cant wait when it fully comes out
Reply
NOBL-e143 days ago

This game is interesting. Hey, how do you use items in the Inventory? I have 4 toilet paper rolls I don't know how to use? (OMG just realized how fricking weird that sounds...)

Absolutely loved this game, although I would personally would like to see more interactions with the toilets like opening and closing seats and lids and flushing urinals as well.

It would also be nice to see another design of Toilet head like for example maybe make a toilet with teeth on it and showing you actually being chewed up and flushed away to the sewers or to another diemention.

These are only suggestions to add as I'd personally think these would make the game even better.

Maybe add some whispering from spirits of people that have been there and didn't escape as well which would sound cool, it would be even scarier.

Also more puzzles with the environment would also blend in as well.

More enemies would be a fantastic addition with some killing mechanics like shove the monsters head into the toilet to drown them and add breakable weapons etc etc.

These are all suggestions.

It would also be great to see the demo start off with something entering a public toilet and getting sucked down the pipes or something like that which then the player ends up in the toilet diemention but again all these are suggestions which I think would make this demo even better then it is but over all I really enjoyed.

I love the lighting and water mechanics and the added puzzles, I love the ambience and the music plus the new character and love the redesigned map.

I can't wait to see the full game when it comes out.

Deffo make it more like Silent Hills with the toilet vibes.

Those urinals were also used in Silent Hill 2 by the way so deffo has Silent Hill potential.

I also have a model of the Silent Hill toilet on Sketchfab which is worth using as well.

Multiple toilet and sink and urinal and other models is also a great suggestion I think.

Definitely recommend CJU Games to play the updated demo, I am pretty sure he'll enjoy this.

Coming from someone who has an interest in sanitary ware mainly retro toilets and sinks, I am definitely keen to see more games like this.

Overall it may be even more epic with the added suggestions but from my prospective I really enjoyed and I am looking to the full game.

The demo for Lost in the Bathrooms is a great experience, full of tense atmosphere and spooky jumpscares! Cant wait for more with the full release :) Check out my video here and leave some feedback if you feel inclined :))

Cant wait until the full game comes out! Really enjoyed this game.

What a fantastic demo to a game! I hope the full game does happen. At one point, I did feel that I was walking around in circles, but eventually found my way out. The toliet head is someone to watch out for! Here is my video on it

Reply
your daily scripter261 days ago

i think he got the name by the backrooms

Yooooo nice demo! Very much reminded me of Puppet Combo style horror games! Nice plot and gameplay! I got hella scared when I got the last valve, I rannnnn out of there back to mr barrel man LOL keep up the good work!

Got to giving the demo a try, nice and responsive game - reminds me aesthetically more of Puppet Combo style graphics/vibes. Looking forward to the full game :P

First i must ask where are the pet/boop/steal the goose buttons ;)

On a serious note i did enjoy the game, i did not play the first game toiletrooms so I cannot give you feedback comparing the two.

But for feedback towards this version:

The lighter and other hand items seem to be above dialog boxes which can make it hard to read, so having the dialog boxes forced to be top layer of the gui would be a good idea.

The valves were Too large and only on walls, making them hidden in stalls and behind bars or on the roofs and of varying sizes, but still obviously standing out (Valve handles being a color that stands out.) would be a welcome change, adding both difficulty and uniqueness.(please do not randomize them though.)

The Monsters Ai needs some adjustments, either by having it stalk the player more closely or have it predict your pathing based on movements to try and block you off after it sees you,

Maybe Allow you to go into stalls and close the door to "hide" but also allow the monster to open stall doors.

Lastly i do not know where you plan on taking the games story but based on the pipeman i assume it will be plumbing systems next?

Which would be interesting, but also maybe later you can add in other bathroom types with own unique monsters and goals.

Instead of just the current deprecated bathrooms, we also see others like maybe old Japanese bathrooms with squat toilets and monsters based off Aka Manto, and Hanako (Japanese youkai/folklore)

Maybe even a bonus Easter egg futuristic type bathrooms that are all clean with a roomba based monster and have all the toilets and taps hand dryers ect. auto turn on when the player walks past making sound for the to head too (in other words a "monster" that is blind and attracted to sound)

Anyways I can't wait to see where you take this, hope at least some of the feedback is helpful, And i will Hopefully survive all this pressure build up that has knocked me out while going down this pipe in this very cramped barrel (i'll try not to roll.)

I did leave feedback in the video right after playing (which i'll be removing from the video at a later time) but the feedback i am writing here is after i had time to think about it a bit more.

We played the previous version and enjoyed it a lot. This build looks even more challenging.

Reply
HuffleScuf264 days ago
I just want to start by saying I was one that played the Original Toiletrooms version of this game, and coming back to this new version is awesome! There was many things I really liked about the 1st one that I will never forget, but all the changes made in this version I really liked! The addition of the side quest for obtaining the key is a nice touch, but I do wish there was more of a threat. The next encounter with the valves was a GREAT improvement! Absolutely loved how much stress it built and shows how freaky/scary the Toilet entity really is. Overall I got really invested and didn't want the Demo to end! Can't wait to see what you do next with the game!
Reply
ChillinWinston265 days ago
Thanks so much for the time you put in this game. Never played the first version of this game, but I can tell you from playing this version that it feels very fair. The map and imagery is quite repetitive, and yet I never felt so lost that I was frustrated. I felt like I always managed to find where I needed to go. Two notes I have from watching through this video during editing: the first was that I noticed the lighter's flame kind of obstructed some of the dialogue. It's not a HUGE deal, but it did obscure some letters so just pointing that out. Another thing was I noticed that in the final segment when we're turning valves, when you turn a valve, the message at the top of the screen reads, "Remaining valves." It's a bit confusing only because the 1/5, 2/5 etc. counter doesn't show you how many valves are REMAINING, but rather how many valves you've found, so maybe it would be more appropraite if it said "4 valves remaining, 3 valves remaining etc." or something like that. (I realize I probably sound nitpicky, but just trying to give good feedback!) Really enjoyed myself with this one. Goose is top tier character. Thanks again!
Reply
Mega Cat Studios265 days ago

I had A TON of fun with this one.

Reply
moooon265 days ago
Game creepy , like it
Reply
Muersitine266 days ago
The new changes have made the game more fun, mysterious and terrifying at the same time! The demo was good.Good job!!
Reply
Basim Aziz266 days ago

Yo nice goose tho.

Really engaging and fun! Plus I was shocked at how genuinely spooky it got! Can't wait to see the full game someday!!

This was bloody brilliant :) Being stuck in that dark maze of bathrooms with that thing scared the hell out of me, cant wait to see more!

Honestly love the name change! I played the Toiletrooms and kept thinking "Bathrooms sounds so much more like Backrooms, wonder why they didn't go with that." So this is pretty cool to see, also that you're expanding. I had a lot of goofy fun before, hope this expansion project goes well. I hope now you have to find Mr. Goose to get his key, I liked Mr. Goose, he was a cool goose.

This was great! Creepy bathrooms are my favorite, so an entire game of them is a real treat.

Short but sweet. I'm glad you're expanding on this :)

How different is it compared to the older Toiletrooms? They look very identical to the naked eye. Perhaps a good idea to elaborate on that in the store page as a suggestion?

Hi, thanks, I've added a list of changes to the page.

Reply
Neco The Sergal268 days ago

Thanks :) Looking forward to checking it out. 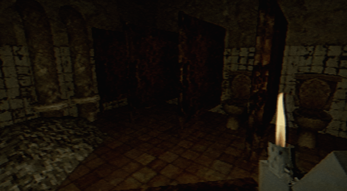 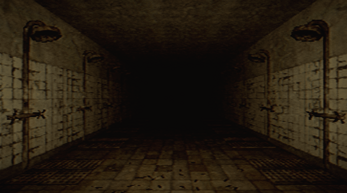 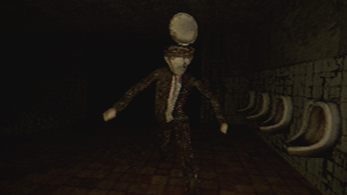 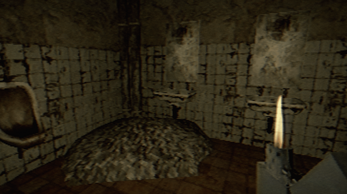